Where have you all gone?

So, my list of followers has vanished.  A sad little empty space where y'all should be.  Blogger is useless in helping solve a widespread problem.

Really? It's funny to you? 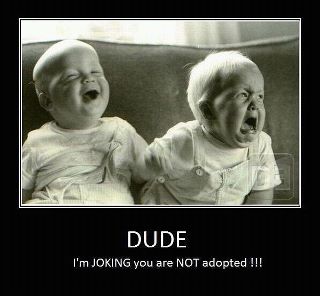 Yeah.  My blood is boiling.

I can honestly say she is someone I love dearly.  In reality, she is my step-sister, but I have always known her, never remember meeting her.  She's my sister.  I don't delineate between my step siblings and blood sibling.

So when I logged on and saw this my blood ran cold, and had to gather myself before I responded.  Her title?  "TOTALLY CRACKED ME UP!!!!!!!"

My reply: "Because adoption is a bad thing?  Not funny."

Hours later she posted back: "Now you know I didn't mean it that way!!  I think adoption is great...it's the brother/sister picking that cracked me up!"

My reply: "It implies adoption is bad, so it's still not funny.  If I found a funny picture of an issue near and dear to your heart, would you still think it's funny?  Cam's place in this family, through adoption, shouldn't be a joke."

My heart is pounding like crazy.  I know my sister meant no harm, because she truly doesn't think before she speaks.  It just hurt my feelings, but now I am just furious.
Posted by JC at 17:30 4 comments:

Everything IS better with butter, after all.

It will be a quiet New Year's Eve for Rob and I.  As I type, he is trying to get Campbell down for the night, but I hear a fair amount of squawking coming from her room.  The kid loves her sleep, so she had better get with the program and settle down soon.


For the last several years, our NYE's have consisted of a fatty, delicious meal and time well spent with Anderson Cooper and Kathy Griffin.   Our menu was originally a chicken dish, but as I stood crushed by humanity in Whole Foods, I called Rob and asked him if he was truly married to the chicken idea.  That's when he said he saw that lobster tails were on sale.  Never, ever send me to the store, because I will always come home with an upgrade.


Whole, jumbo lobsters.  Those suckers were so big the guy had to bang the lid shut.  I reflexively winced, as that gesture was a bit overkill considering the claws were double-banded.  The tiny hippie in me feels bad that my dinner is living in my fridge right now.  Not so bad that I won't dredge him/her in delicious, fatty butter and slurp down every morsel fit for consumption.


I just hope the tiramisu I bought for dessert will keep us awake until midnight.


My wish is that all 17 of my readers have a blessed, peaceful, joyous new year.  Peace out until next year folks.

Dirty mouth and all. 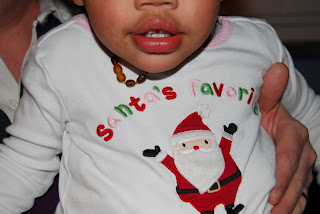 A partridge in a pear tree?

Today I took Cam to the doctor, because she has had a hacking cough that resembles an old lady with a three-day-a-pack habit.  My mom intuition was rewarded with one ear infection and a pat on the back for keeping the nose drippy (which is causing the cough) and not all snotty and congested.

I took her to the practice we have been seeing since a few days after we brought her home.  I am not in love with the practice, for which I will only name one thing I have a gripe against: the doc NEVER remembers that Cam is a girl.  Never.

I took her there today because the new practice is a 30 minute drive, and I am essentially lazy.  But today, I was pleasantly surprised at how fast we got in for a sick call and the gentle nature of the on-call doc.  Loved him.

Cam, however, did not.  After winning her affections by playing a game with the stethoscope, he then had me hold her down (which she oddly submitted to) so he could dig out a piece of wax from her ear.  Campbell is dramatic, I'd say, but this kid screamed the scream of her ear drum being butchered, to which the old guy smartly said "Plan B.  Ear wash."

Cam continued to holler and gasp for breath, soaking my shirt, for the next 10 minutes.  As soon as that door shut behind him, she cut the waterworks and smiled at me.  Heh.

Off to the pharmacy, did a little lunch date with my BFF, and then home for a nap.  While we were out Rob took Dixon to the vet for a strange, and worrisome growth on his paw pad.  Turns out, it a flippin' wart.  Who the hell has ever heard of a wart on a dog?  Exactly.

The remedy?  The vet asks Rob if it would be feasable to soak Dixon's paw in Epsom salts each night.  To which my dear husband says "I'll check with my wife."  WTF?  A pedi for the Pug?

Back to the pharmacy.  Same guy on duty, asks if I forgot anything.  Nope, back for more this time for me and the dog.  The dog's script cost more (antibiotics for him, sleeping meds for me  ;)  )

As I returned home I though about the last month.  Rob and I both had awful stomach bugs this week (still feeling wobbly).  Cam and her ear infection.  Three cats with worms (all good on that front now).  Zelda Pug has scratched her eye for the 3,274th time.  And now Dixon with his wart-paw.

Would sir require a foot bath this evening?
Posted by JC at 21:02 1 comment:

Yesterday both Rob and I were hit hard with a stomach bug.  As is both the upper and bottom systems were firing at the same time, and only death could remedy it.  Seeing as how Cam was her normal cheerful, energetic self yesterday morning, both Rob and I blamed the chicken wings we had for dinner the night before.

Then today I found out that a smattering of kids form my mommas group have been sick too...no other adults though.  I honestly didn't think 40 somethings could get this sick from a bug, that our systems had worked it all out when we were kids.

Today is better, but my energy is non existent and I am wary of all foods.  Rob on the other hand, has figured that since he stopped puking, a greasy gyro would be the best first meal.  Me thinks he will live to regret that choice, especially after I tell him that my mommas group friends told me the bug took about 4 days to pack up and leave.

It will be a cold day in hell before I eat chicken wings again though.  Even if they had nothing to do with it, they were not all that pleasant the second time around.
Posted by JC at 13:41 No comments:

Having insomnia is a bitch.  I take meds for it, which make sleeping easier, but make getting up and out of the rack in the morning an awful pain in the ass.  Saturday mornings I have an AA meeting that I love, my "home group" if you will.  I haven't been for a few weeks because of, well, dragging my carcass out of bed seems to be a bit harder on Saturday mornings when I know Rob and Cam will be up and out of the house.

So glad I got up and went to that meeting.  In four and a half years, a lot of the same faces are there week after week.  Even though I am terrible about small talk, and have yet to get a sponsor, seeing those same people is very comforting.  A man celebrated his first year of sobriety today by sharing his experience, strength, and hope. So many people spoke up to tell him how much they admire his courage and that he is an inspiration.

Then someone shared that they go to a meeting down in Florida that has a big sign over the door: "You Are Never Alone Here".  It's true.  The place I most feel comfortable is in an AA meeting.  People genuinely CARE about me there.  They care about all of us.  And no matter how shitty I feel on any given day, when I sit in that meeting, or any meeting, I feel a sense of peace and serenity that only comes from feeling not alone. Someone then remarked how they heard once that an AA meeting is one of the only places they have walked into a room full of strangers and were able to reminisce.

If I could wish anything for people in 2012 it is that they have that same sense of peace and serenity that I get an hour at a time in those meetings.
Posted by JC at 13:50 1 comment: